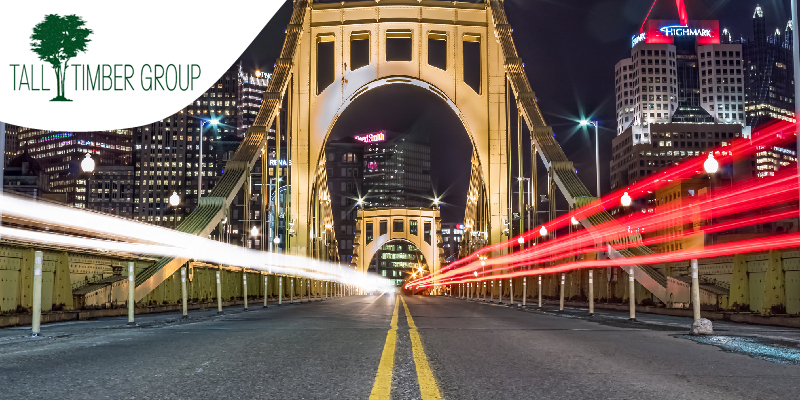 Pittsburgh’s real estate landscape has changed significantly since the slowdown of the manufacturing and steel industry decades ago. The influx of technology giants such as Uber and Google has brought a rise in the demand for both commercial and residential real estate. The low cost of property relative to cities like New York and San Francisco has been attracting companies such as Duolingo, a language learning app that moved its headquarters to Pittsburgh and subsequently put up billboards in San Francisco in 2018 advertising, “Own a Home. Work in Tech. Move to Pittsburgh.” Although plenty of attention has been paid to the effects of the tech industry on residential real estate, not as much as has been placed on commercial real estate.

Today, we will try to connect the dots between the influx of high profile tech companies, trends in local employee behaviors, and how this new Pittsburgh business atmosphere is having a major impact on the local commercial real estate market. 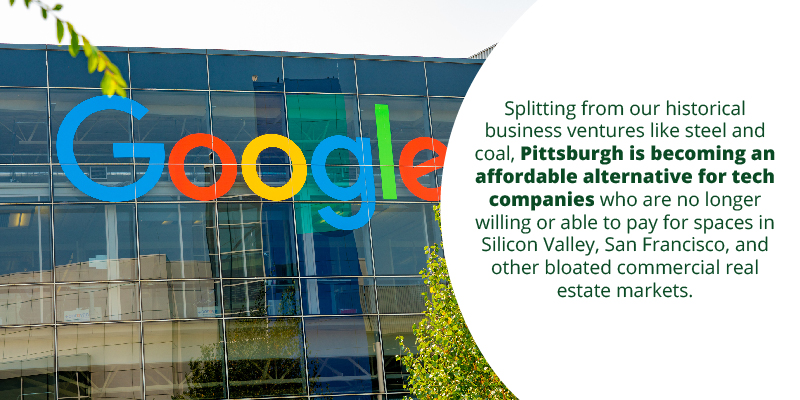 Most of us in Western PA have noticed the recent boost in high tech presence in our local regions. Splitting from our historical business ventures like steel and coal, Pittsburgh is becoming an affordable alternative for tech companies who are no longer willing or able to pay for spaces in Silicon Valley, San Francisco, and other bloated commercial real estate markets.

Much of this tech boom is reliant on the rich talent pool being churned out by local universities. In particular, computer science, robotics, and other high tech programs at Carnegie Mellon University are routinely ranked amongst the best in the world. In recent years, companies like Google and Uber have been working hard to keep these young tech professionals in the local Pittsburgh area after graduation. Those efforts are starting to pay dividends. 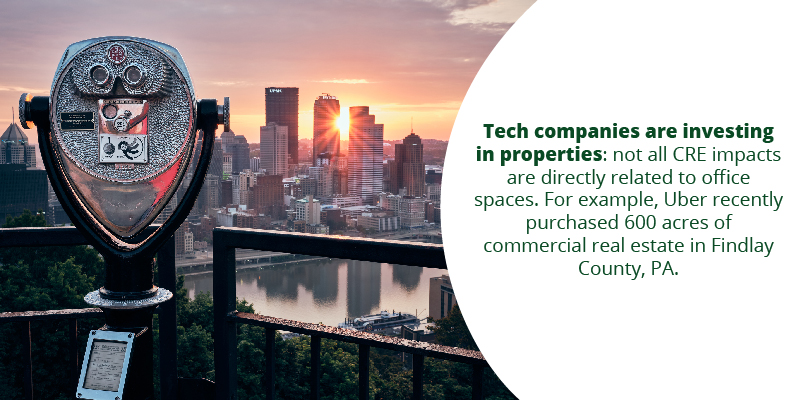 While there are many players in the technological revitalization of Pittsburgh, there are a few key players who are leading the way.

Google has long made massive investments in Pittsburgh, particularly with their Bakery Square office spaces. The refurbished Nabisco factory is a fitting transition from the old to the new. Much like Duolingo, Google has actively pursued bringing tech talent to the Pittsburgh area to live and work in the East End.

Uber employs thousands of workers in the Pittsburgh area, which of course does not include the drivers themselves. Perhaps more importantly, Uber has selected Pittsburgh as a research center for self-driving cars. This move ties the ridesharing tech giant to our region for years to come.

Duolingo was founded and is currently headquartered in Pittsburgh. In December, Duolingo became Pittsburgh’s first tech “unicorn” when a fundraising round pushed the company’s value above $1 billion. Rather than going the route of other tech giants and selecting our region as an affordable alternative, Duolingo has always been committed to revitalizing the Pittsburgh area. Duolingo employs 200 workers in local offices.

The Impact of Tech Companies on Commercial Real Estate in Pittsburgh 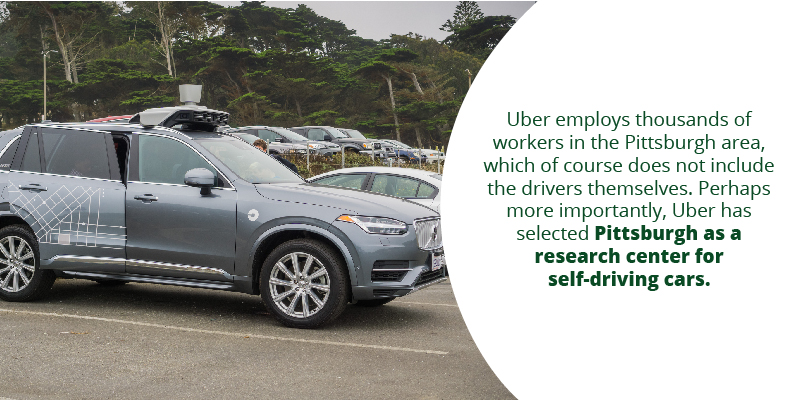 Beyond the obvious connection of tech companies’ presence being an injection to the local economy, here are some concrete ways in which tech companies have impacted the local commercial real estate industry:

There are no signs that the trend of high tech companies choosing Pittsburgh will slow any time soon. An industry-wide trend of shifting away from California and other west coast markets towards traditionally affordable markets is driving the tech industry overall. Other cities experiencing similar growth include Nashville, TN and Austin, TX. The Pittsburgh commercial real estate market has responded in turn, focusing more on offering high scale amenities at premium prices.

What remains to be seen is whether any other large companies like Amazon will set up additional headquarters in our area. Regardless, the effort to keep local talent and recruit local talent to our area will certainly continue to have a major impact on our economy and real estate markets.