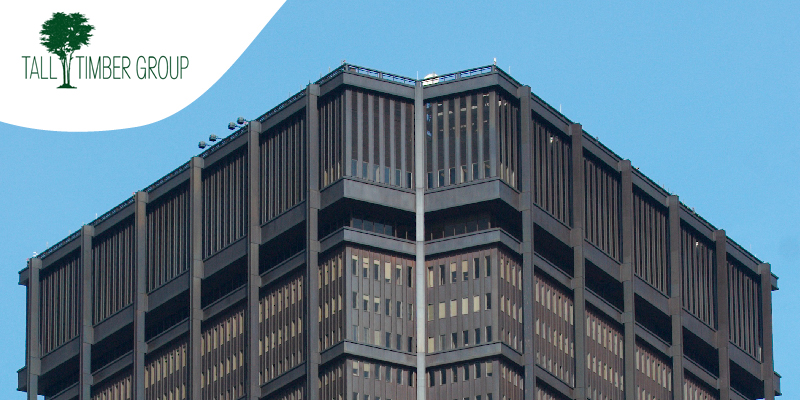 The US Steel Tower, also referred to as the Steel Building and the USX Tower, has been a trademark of the Pittsburgh skyline since its construction was completed in 1970. The building is now also known as the UPMC building, and has a long history of importance to the Pittsburgh people, identity, and economy. Recent renovations have breathed new life into the now 50-year-old building. Office spaces in Pittsburgh have become more decentralized in recent years with tech companies like Google and Uber electing to headquarter outside downtown offices.

With all of this in mind, today we will review the recent work being done on the US Steel building and what impact this might have on the building itself and downtown as a whole. 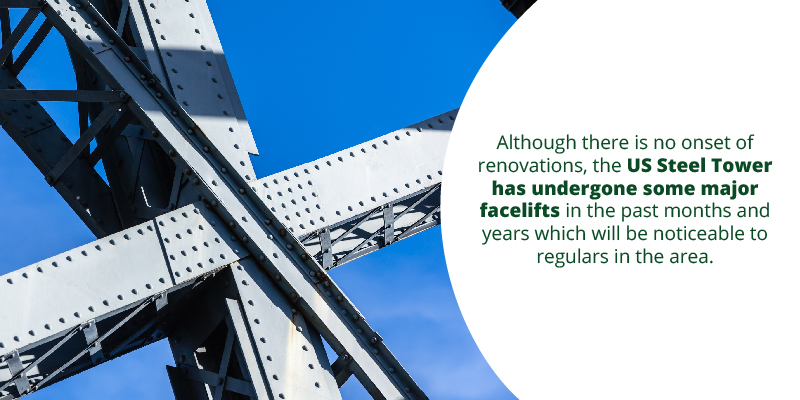 Although there is no onset of renovations, the US Steel Tower has undergone some major facelifts in the past months and years which will be noticeable to regulars in the area. Here are some of the highlights:

LEED stands for Leadership in Energy and Environmental Design. While the US Steel Building may be thought of as a 50-year-old dinosaur, it is likely the most economically and technologically advanced building in downtown Pittsburgh. This is thanks to recent renovations aimed at efficiency and eco-friendliness.

The US Steel Tower renovations modernized the infrastructure

As a continuation of the above, the US Steel Tower has implemented a number of modern changes that improve cost and environmental inefficiencies. Modern renovations/improvements include retrofitting water supplies, sustainable energy practices, offering alternative transportation services, installing eco-friendly LED lights, installing eco-friendly HVAC products, and much more.

As part of UPMC moving in, several large renovations took place to the office amenities of the US Steel Building. These renovations included:

These renovations covered a total of 185,000 square feet over 11 months and were all part of the LEED silver certification process. 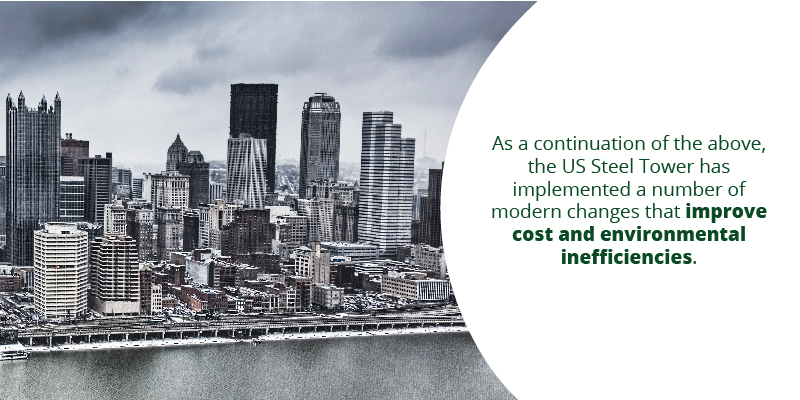 To understand why renovations of the US Steel Building are so significant to the local Pittsburgh economy and atmosphere, let’s look at some quick facts on the building itself. 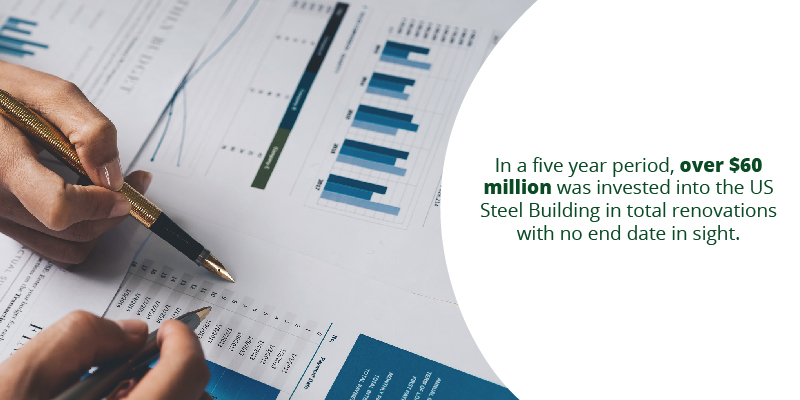 In a five year period, over $60 million was invested into the US Steel Building in total renovations with no end date in sight. These changes include:

For those of us native to Pittsburgh, the US Steel Tower is probably the building we think of when we think of the downtown area. While the name and ownership may have changed hands, the importance of this structure remains. Recent renovations have improved both the work lives of the office tenants within and the amenities for the public passing through the building for a bite to eat or just to take in the sights. With major backers including CBRE and Jamestown L.P., it is likely that we will continue to see investments being made into the tallest and most historic Pittsburgh skyscraper.