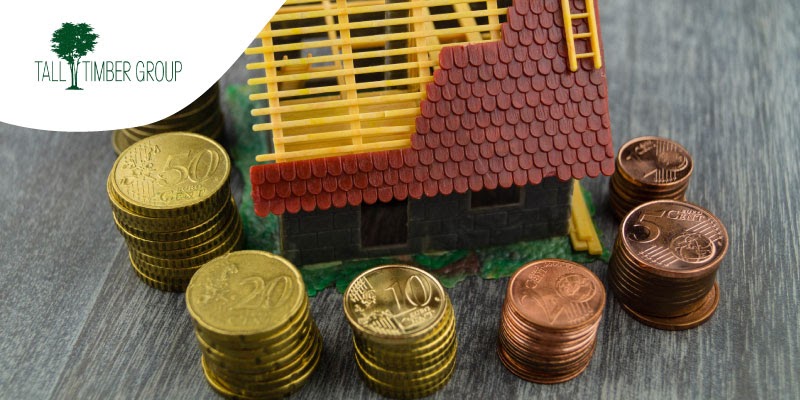 With this in mind, today we define the federal funds rate, discuss the details of the latest rate cuts and a brief history of past cuts and hikes, and finally identify how these changes will likely impact the commercial real estate sector. 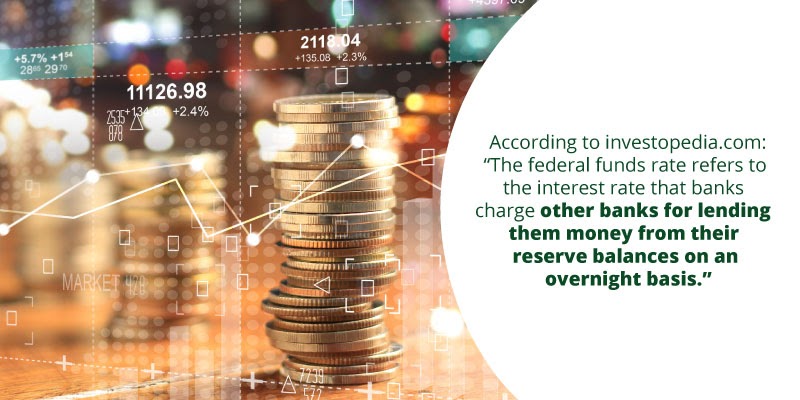 According to investopedia.com: “The federal funds rate refers to the interest rate that banks charge other banks for lending them money from their reserve balances on an overnight basis. By law, banks must maintain a reserve equal to a certain percentage of their deposits in an account at a Federal Reserve bank. Any money in their reserve that exceeds the required level is available for lending to other banks that might have a shortfall.”

Normally three straight fed funds rate cuts is not a great sign for the economy overall. The last time this many consecutive rate cuts took place was in 2008 amidst the housing crisis and Great Recession. The latest cuts move the effective rate from 1.75% to 1.5%.

Generally, cutting the federal funds rate is intended to spur economic growth. These cuts come at a time when more observers are predicting that a recession is looming in the next year or two. Yet not everything is doom and gloom. Opportunist investors can take advantage of low fed funds rates to secure loans, make investments, and much more. Individuals who are looking to refinance mortgages or open home equity loans are perhaps the biggest winners from these fed rate cuts.

Lower fed funds rates only impact those who are looking to open new loans or refinance existing loans. For this reason, pre-existing loans and mortgages will be unaffected by the cuts. This essentially means that those who are locked into unfavorable loan situations might want to jump on this opportunity to refinance.

There are several ways in which federal rate cuts might impact commercial real estate, including:

Commercial real estate investment can sometimes rely on what is known as “the spread”. The spread is determined by finding the difference between the cap rate and the finance rate. As federal funds rates influence finance rates, this can make CRE investments more or less attractive over time.

Federal funds rates cuts have a trickle down effect

It would be convenient to say that fed rates have a 1-1 impact on commercial and other forms of real estate. In reality, the relationship is far more complicated. Consider the fact that rate cuts are tied closely to poor economic performance. This in and of itself has reduced the positive impact of past rate cuts. Current and future rate cuts seem like they should have a straightforward, positive impact on commercial real estate investment. This simply is not always the case. Rate cuts might boost property values, but also may reduce demand, be tied to inflation problems, and many other potential impacts which are too complex to properly describe (or understand) in a single article. 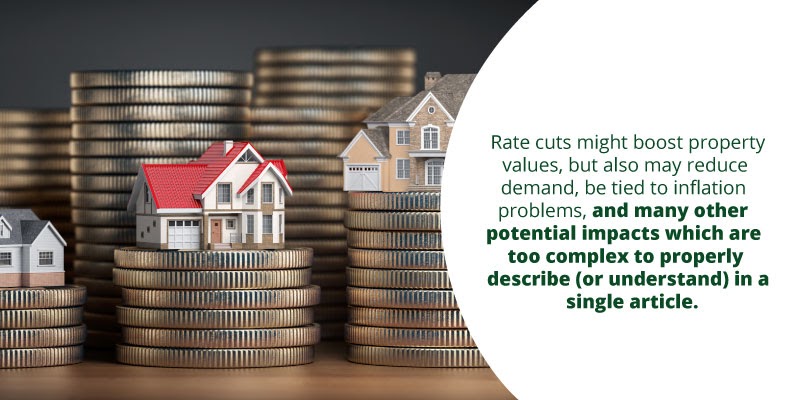 It is yet to be determined whether the recent trend of consecutive rate cuts will continue as 2020 progresses. Rates are already very low, and can be reasonably expected to stagnate or bounce back in the future. This may also be reactive based on overall economic performance. Metrics point to mild recession in the next few years. How this will impact the federal funds rate will certainly continue to be a major factor in the commercial real estate investment space.

Climate change, also referred to as global warming, has accelerated in the past century. The normal ebbs and flows of our planetary climate have jumped off course beginning in the mid 20th century. Political opinion, root causes, and other debates aside, this trend is set to continue or even accelerate in the near future. The impact of climate change has been felt in many industries, and the real estate market is certainly no exception.

It may be a tempting thought to envision ourselves as being untouchable if we leave in a temperate area, far away from the coastline. The fact of the matter is that all real estate values may be touched by climate change in the coming years. It isn’t just hurricanes that change real estate values. New laws, regulations, and economic realities which may result from climate change will likely lead to a volatile real estate landscape. 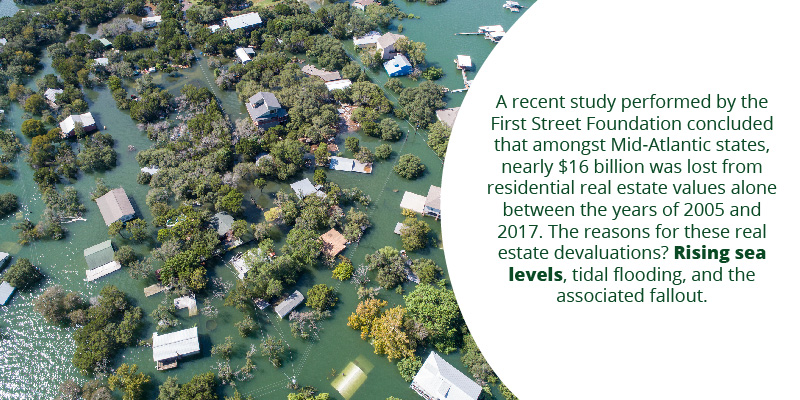 To understand the reality of how climate change impacts real estate, let’s look at some of the more well known examples of real change already being experienced today.

A recent study performed by the First Street Foundation concluded that amongst Mid-Atlantic states, nearly $16 billion was lost from residential real estate values alone between the years of 2005 and 2017. The reasons for these real estate devaluations? Rising sea levels, tidal flooding, and the associated fallout. Florida was found to have the largest financial loss. While this study focused on residences, the commercial real estate market was hit equally hard.

Another less obvious reason why commercial real estate properties lose their value due to climate change is the influx of stronger, more frequent storms. Many of us have heard that climate change has caused warmer waters and stronger hurricanes. Climate change has also been potentially linked to worsening tornado seasons in the midwest and across the globe. All of this can destroy real estate, raise insurance rates, and devalue properties overall. 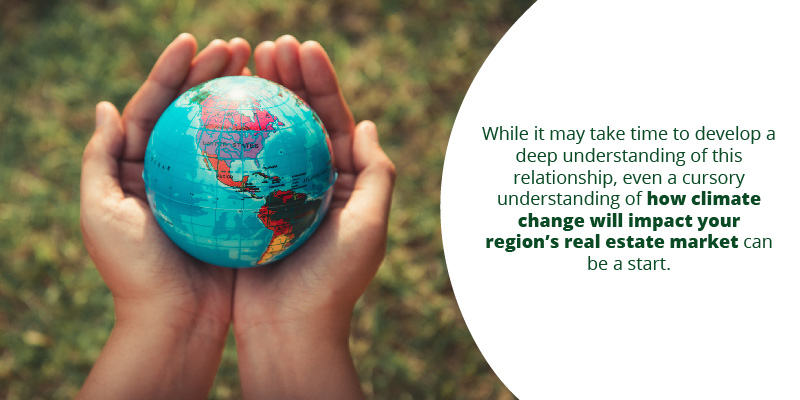 Of course it isn’t all doom and gloom. There are ways for savvy real estate investors to educate themselves on climate change and its impact on future decisions. While it may take time to develop a deep understanding of this relationship, even a cursory understanding of how climate change will impact your region’s real estate market can be a start.

Immediate risks include some of what we discussed in the previous sections: namely flooding, hurricanes, tornadoes, droughts, and so forth. Some regions have always been subject to these considerations while some regions may find themselves in the crosshairs for the first time. These types of risks are potentially catastrophic including total loss of investment and/or lengthy closures.

Less immediate risks might include an area being depressed over time due to climate change. The relationship between climate change, population growth, industry regulations, and everything in between can be the difference between a highly profitable investment in commercial real estate and a financial failure.

Last but not least, insurance costs are expected to increase due to climate change. This may impact your region more or less depending on the volatility of the climate and by extension the likelihood of property damage due to climate-related events. As with all real estate (and business) decisions, the decisions stems from weighing the potential benefits vs. the possible risks.

With the melodrama of the 24 hour news cycle, it can be hard to separate fact from fiction. Are sea levels truly rising causing massive property damage or is this yet another Y2K? We already referenced the massive financial losses which have been incurred all along the eastern seaboard. Unfortunately, those losses are just the tip of the proverbial iceberg.

If you have an interest in real estate in a city like Miami, New York or New Orleans, this might come as old news. If you live inland, the potential ripple effect might cause shifts in real estate valuation in either direction. As Mark Twain once quipped, “buy land, they’re not making it anymore”.

When it comes to projections on climate change, the future is murky. What we do know is that the real estate market has already seen a material impact as both a direct and indirect result of rising temperatures, stronger storms, and everything in between. Moving forward, businesses and real estate investors should keep climate change on their checklist for any potential real estate transaction. Even the most seemingly isolated locations are not isolated from the shifting climate.

The trickle down impact of stricter environmental regulations might also influence real estate value as well as local, state, and national economies. As with all economic shifts, staying ahead of the curve might well lead to the greatest possible outcome.