The various reports on the labor market this past week drew a clearer picture of what the employment situation is. Many observers were disappointed in the report from ADP on private payroll growth on Tuesday. Private employers added 362,000 jobs in July, well below expectations; however, the forecasts for hiring focused on growing demand and apparently discounted the shortage in worker supply. Below the headline number, private employers reported overwhelmingly that they had openings there were going unfilled. You can’t add to payrolls if you don’t have applicants.

Thursday’s report on unemployment claims was encouraging top to bottom. The headline showed first time claims declining by 14,000 to 385,000 compared to last week. Better news was the low number of layoffs, which fell to the lowest level in 21 years. The best news was the 11% drop in continuing unemployment claims. The 365,000 people who came of continuing unemployment insurance brought the number of long-term unemployed to 2.93 million.

Friday’s Employment Situation Summary – the July jobs report – was the icing on the cake. Employers added 943,000 workers in July, bringing the unemployment rate down to 5.4%. The total number of those unemployed or employed part-time instead of full-time remained 4.39 million higher than in February 2020, more than double the pre-pandemic number. That number is falling more rapidly than expected, however, and is now well below the number of job openings that exist. Most encouraging was that the number of employed part-time for economic reasons fell to 4.5 million, just 100,000 above the February 2020 level.

Job creation was strongest in the hospitality fields, with the normalized travel season creating demand for 380,000 workers. Local government education sector gained 221,000 jobs. That bodes well for a fall reopening of schools, which in turn will have a beneficial impact on the available workforce that left jobs to supervise school from home.

Economists had expected roughly 100,000 fewer jobs to be created in July. While cheering the employment gains, most cautioned that the employment and household surveys were done in mid-July, prior to the surge in infections and hospitalizations from the Delta variant. The recent surge has altered plans for return to office and slowed activity at restaurants and other leisure businesses; however, thus far the resurgent COVID-19 infections do not appear to be altering the accelerated return to normal business activity. Where the surge is likely to be felt in the short-term is in consumer activity, and there is some data suggesting that is happening.

One measure of consumer confidence, Morning Consult’s consumer survey, fell 4.6 points in July after the Delta variant took over. Willingness to eat at a restaurant fell several points during the month. The dent in consumer confidence and activity comes at the point that the individual safety nets established during the pandemic are wearing off. That may move more people back into the workforce in September, but it also exposes more people to economic insecurity at a time when an unchecked rise in COVID-19 cases dampens hiring and activity. How quickly this latest surge can be beaten back by increased vaccination will determine how much the Delta surge damages the economic recovery that is underway.

The New York Fed’s Quarterly Household Debt and Credit Report showed that consumer credit jumped to an all-time high of $14.9 trillion in the second quarter. The important takeaways were the robust finances of the U.S. consumer and the benefits of the CARES Act. The former reflects how well the majority of U.S. households fared during an extraordinary economic upheaval. The latter remains a work in progress, as much of the feared deterioration of loan portfolios is being avoided by the continued forbearance provisions in the CARES Act. Loans in forbearance, especially those which were a result of forbearance offered by private lenders, have been declining; however, avoiding future increases in delinquency and bankruptcy will depend upon good fortune in timing the recovery ahead of the end of forbearance periods. That’s the economic reason why ending the spread of the Delta variant quickly is so critical. 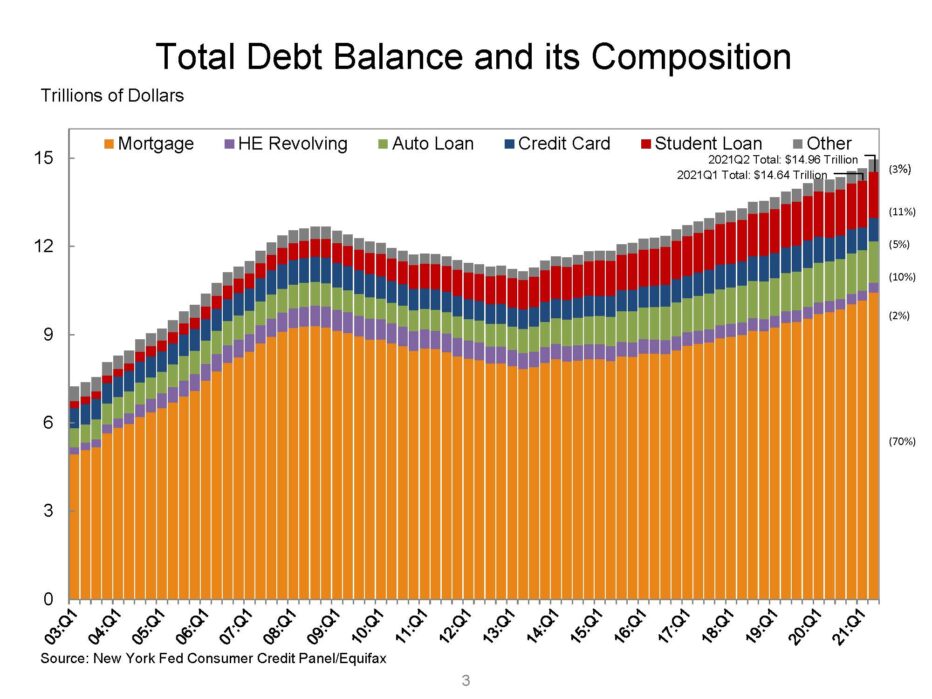 Regional residential construction soared in the 6-county metro Pittsburgh area during the first half of 2021. The number of developed residential lots still lags the demand but new subdivisions started in the past two years have opened up new construction to levels unseen since before the Great Recession. Housing starts overall increased by 43.9% year-over-year to 2,755 units. New construction was higher in single-family – both detached and attached – and multi-family. With another 1,200 or so units in the pipeline for start in the second half of the year, housing starts should exceed 6,000 units in Pittsburgh for the first time since 2013. In commercial construction news, Rycon Construction was low on the $12.4 million University of Pittsburgh-Greensburg Life Science Building.