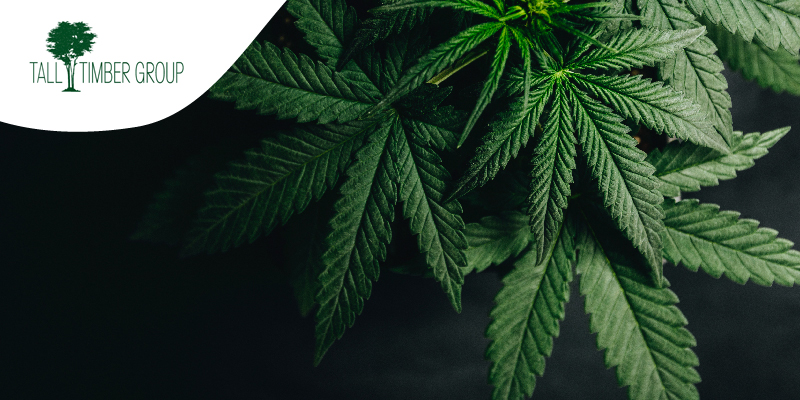 No matter what your personal views on the matter, the cannabis legalization discussion is here to stay. As of the writing of this article, marijuana is fully legal in 11 states and legal for medical use in over half the states in the US. Those numbers are not expected to diminish, with additional states considering full or partial cannabis legalization. What has followed has been a growth in a previously non-existent industry that has affected both micro and macro economics in the US. The question we now ask is: will cannabis legalization change the commercial real estate market?

To answer this question, today we will explore the current state of marijuana legislature as well as future projections, the likelihood that cannabis will become fully legalized in the state of Pennsylvania, and discuss how federal and state legislation on cannabis has and will continue to impact the CRE industry.

The Latest on Cannabis Legalization 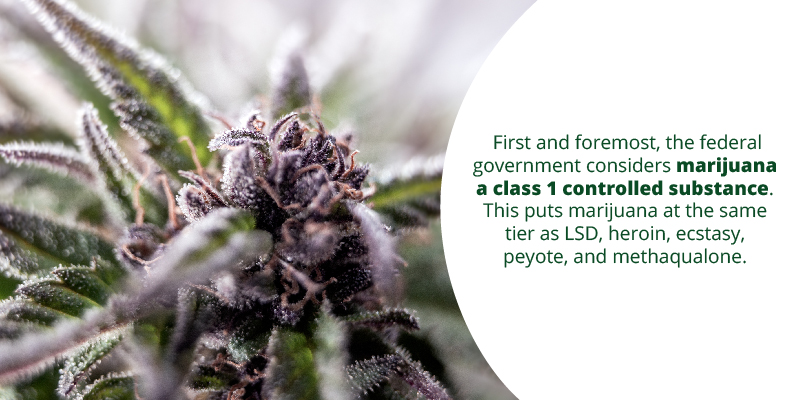 There is nothing clear about the current state of cannabis legalization. So let’s stick with the facts. First and foremost, the federal government considers marijuana a class 1 controlled substance. This puts marijuana at the same tier as LSD, heroin, ecstasy, peyote, and methaqualone. While legislation has been proposed, the nationwide legalization of marijuana is likely very far off.

It should be noted that although we consider these states part of a group, their individual laws on cannabis regulation vary dramatically. What remains constant is that users must be over the age of 21, and distribution is still highly regulated. The states that have legalized marijuana include Washington, California, Maine, Michigan, Alaska, Nevada, Colorado, Oregon, Illinois, Massachusetts, and Vermont.

33 states plus the District of Columbia allow residents to own and use marijuana when it is prescribed by a physician. Pennsylvania is one of these states. These laws become even cloudier than the “fully legal” 11 states listed above, as the medical red tape can be quite complex. 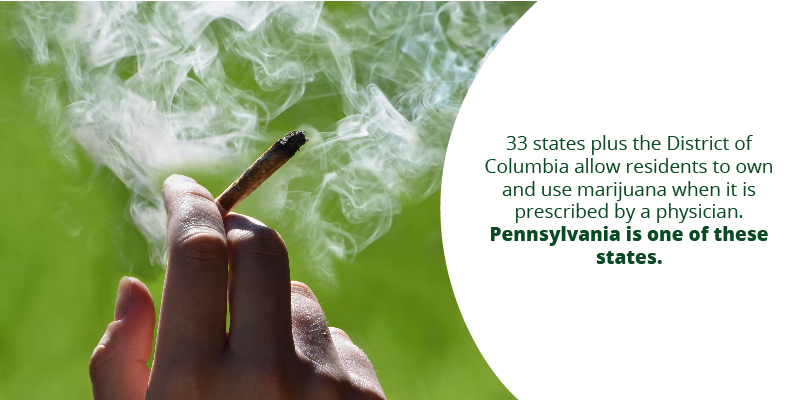 Fully illegal vs. decriminalized and beyond

For the 39 states that have not legalized marijuana, there are varying degrees of criminality associated with possession and distribution charges. Some states including Delaware, Connecticut, Maine, and New York, have reduced cannabis charges, meaning previous punishments have been diminished for those.

Will Cannabis be Legalized in Pennsylvania?

Pennsylvania’s laws on cannabis allow for medical use only. Unlike some other states, Pennsylvania has not enacted laws to decriminalize marijuana possession or distribution charges. As we discuss the possibility of the marijuana business impacting commercial real estate in our region, the next logical question becomes: how likely is it that cannabis will become legal in Pennsylvania?

The answer is as complex as you might imagine. Politicians including Governor Tom Wolf and Lieutenant Governor John Fetterman have both gone on record stating that they would consider the legalization of marijuana in the future. In the case of Fetterman, he is openly in favor of full legalization on the state and federal level. 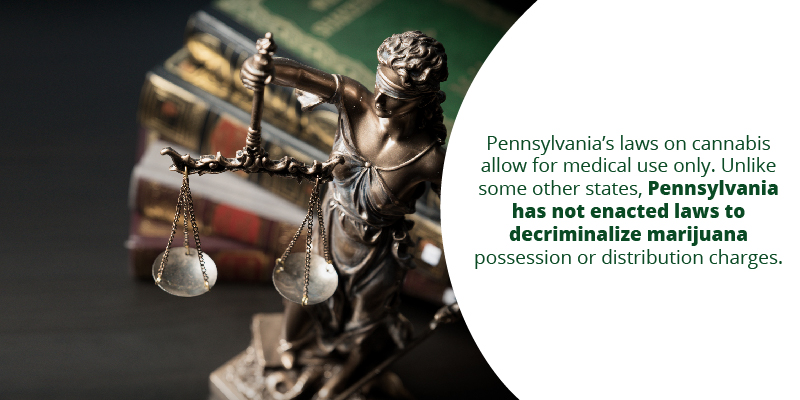 Recent polls suggest that 59 percent of Pennsylvanians support the recreational use of marijuana. This is in stark contrast to a similar poll in 2006, in which only 22 percent of registered voters were in favor of recreational marijuana use becoming legal. The biggest considerations continue to be:

How Cannabis Legalization Has Impacted the Commercial Real Estate Market

The legal marijuana industry has already eclipsed $10 billion in the US. The cannabis market is potentially the fastest growing industry in the nation. Commercial real estate investment is a huge part of that growth. Here are a few ways in which marijuana impacts local CRE markets:

At the moment, legalized marijuana in Pennsylvania is all a hypothetical. The benefits of legalized marijuana for business and for commercial real estate are well documented. If and when our state (or the fed) chooses to adopt cannabis, there will certainly be an opportunity to pounce. The question going forward will become when that happens and what regulations will come along for the ride. 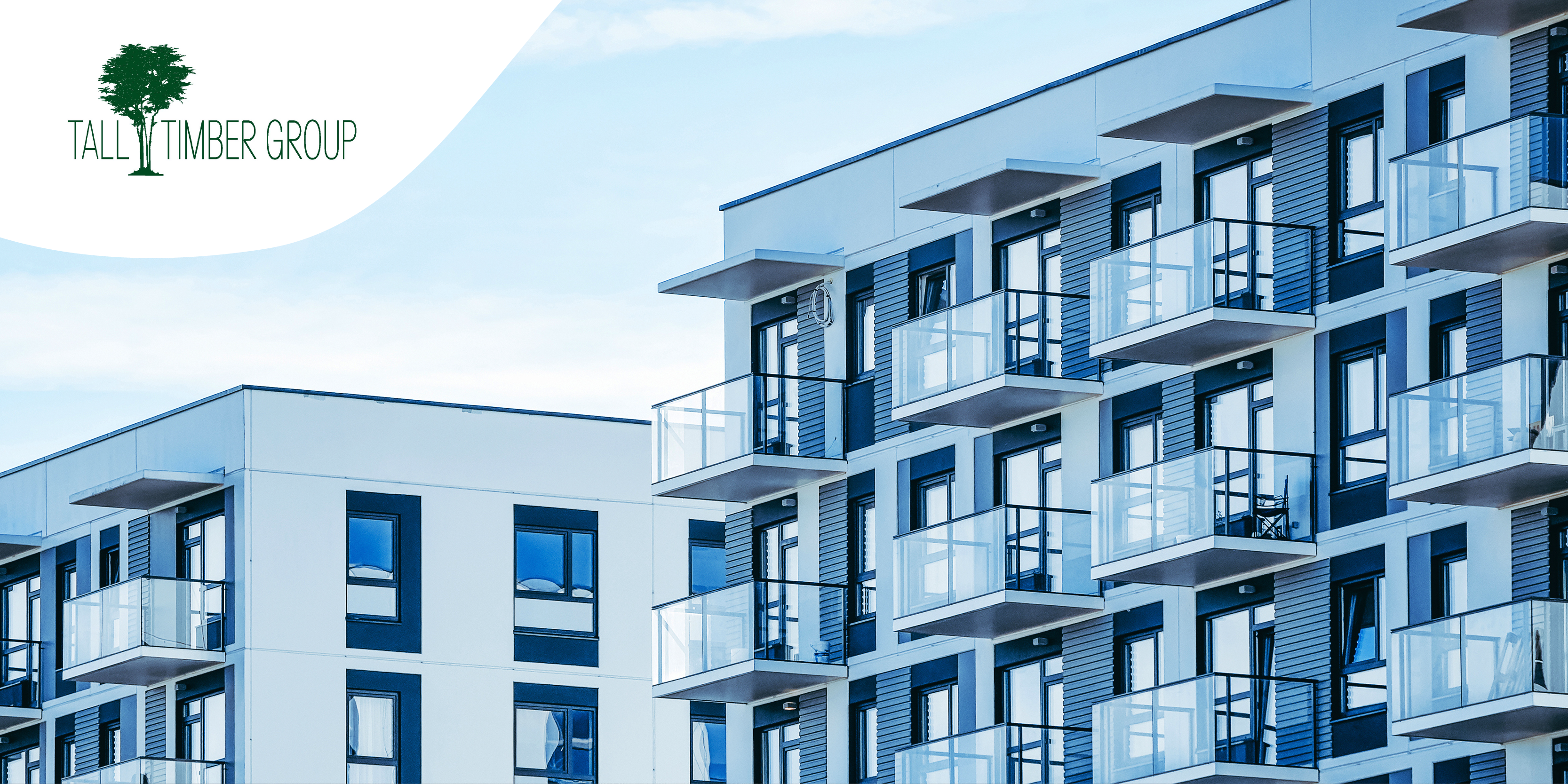 Short term rentals have gained popularity due to the rise of companies like AirBNB, Tripping.com, FlipKey, and others. Multi-family properties have long been a staple of residential real estate investment or larger commercial real estate groups where single buildings are built or transformed to accommodate two or more units. When this new real estate trend met a stalwart in the CRE world, the results have been mixed. As we will review today, short term rentals of multi-family properties do offer a lucrative opportunity, but one that comes with a number of practical, legal, and financial risks.

Moving on to the other side of the conversation, what are the potential benefits of short term rental agreements? Here are just a few of the reasons why property owners are opting for short term rentals as a money-making operation:

Short term rentals can charge higher rates. This is perhaps the most obvious advantage of short term rentals. While $100 a night for a short term rental might seem reasonable for many areas, $3,000 per month in those same areas almost certainly would not. Rates are adjusted depending on the length of the rental, but the property owner typically makes more money per day/week than they would on a longer term arrangement. 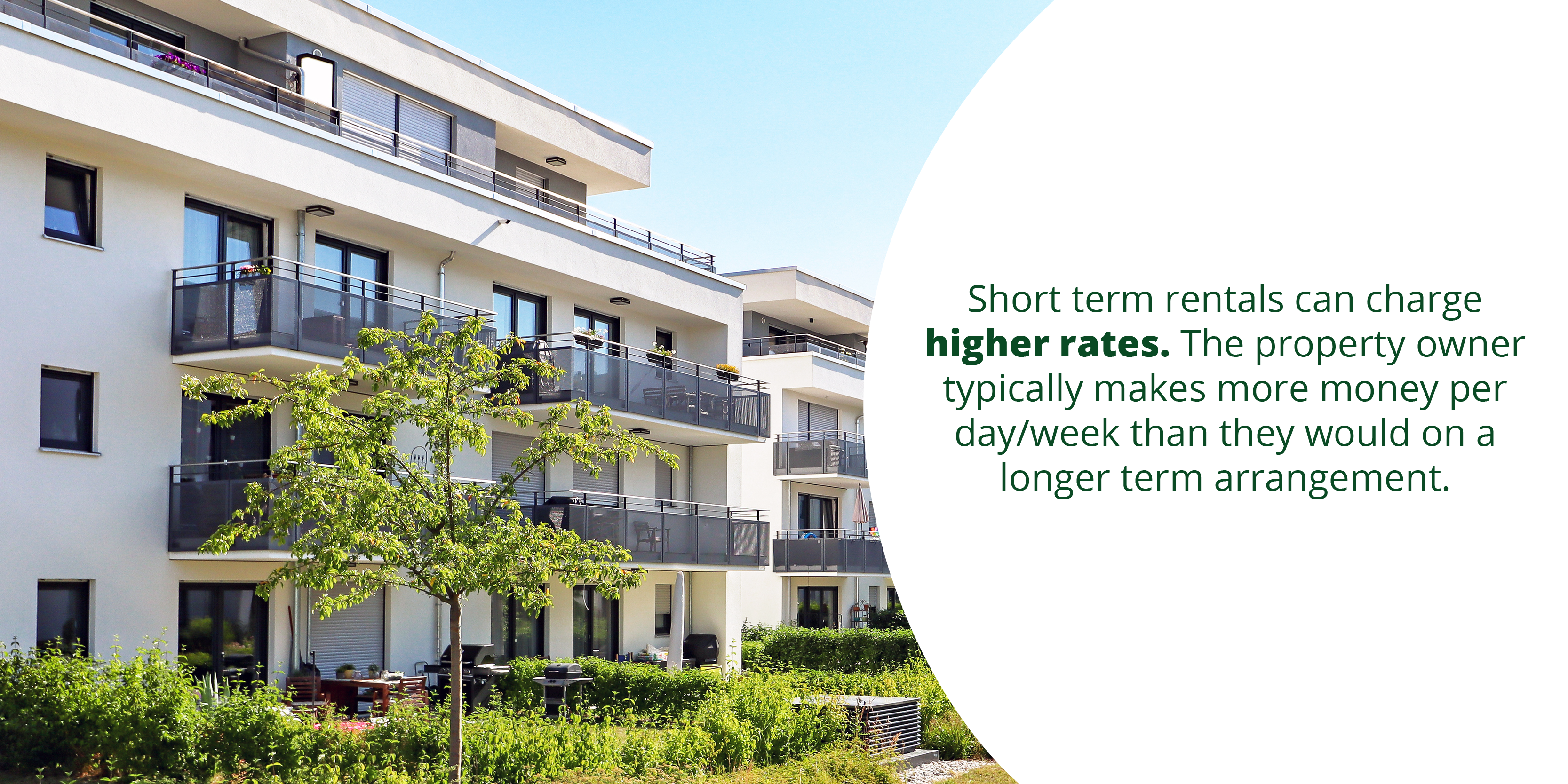 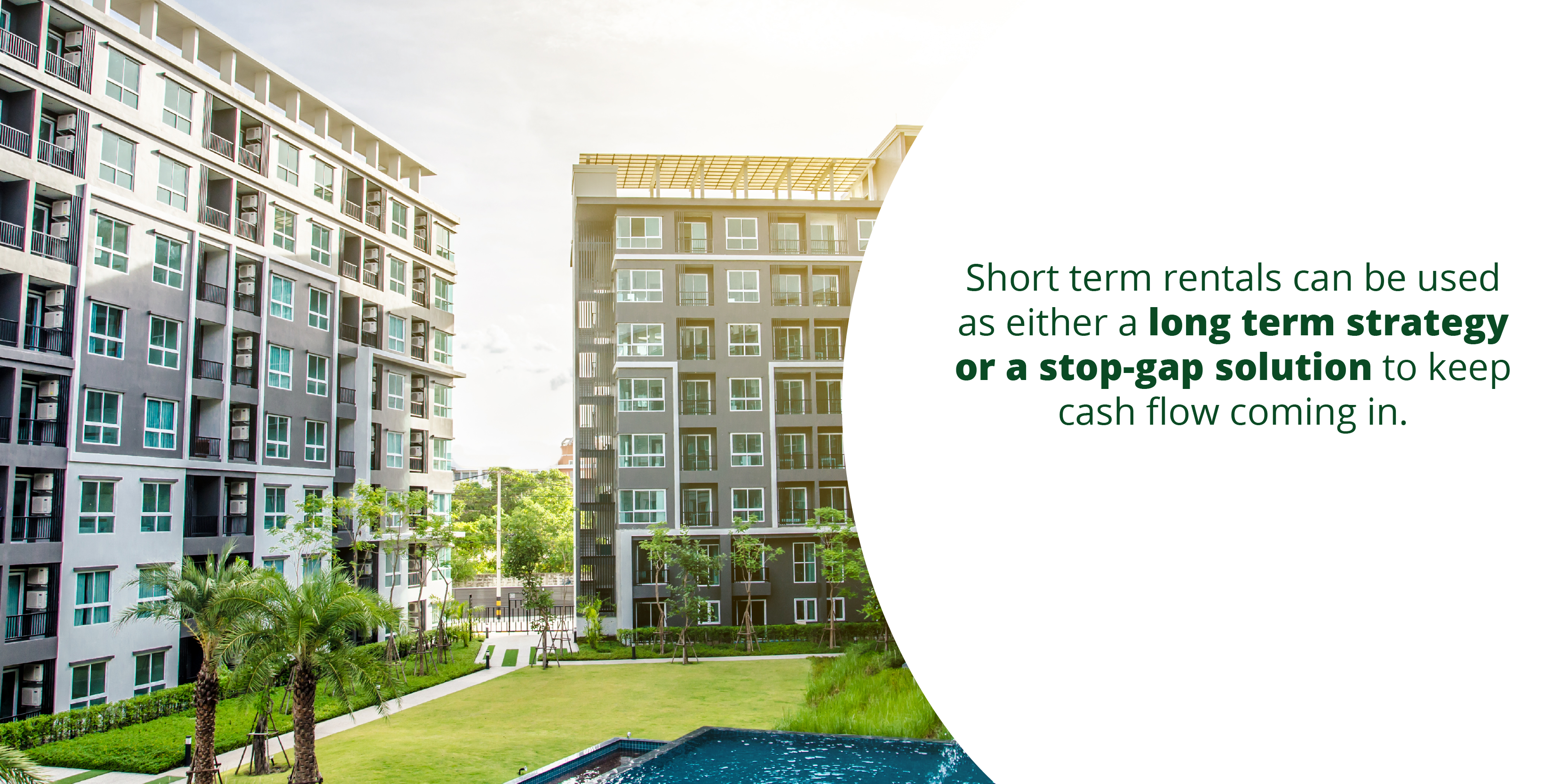 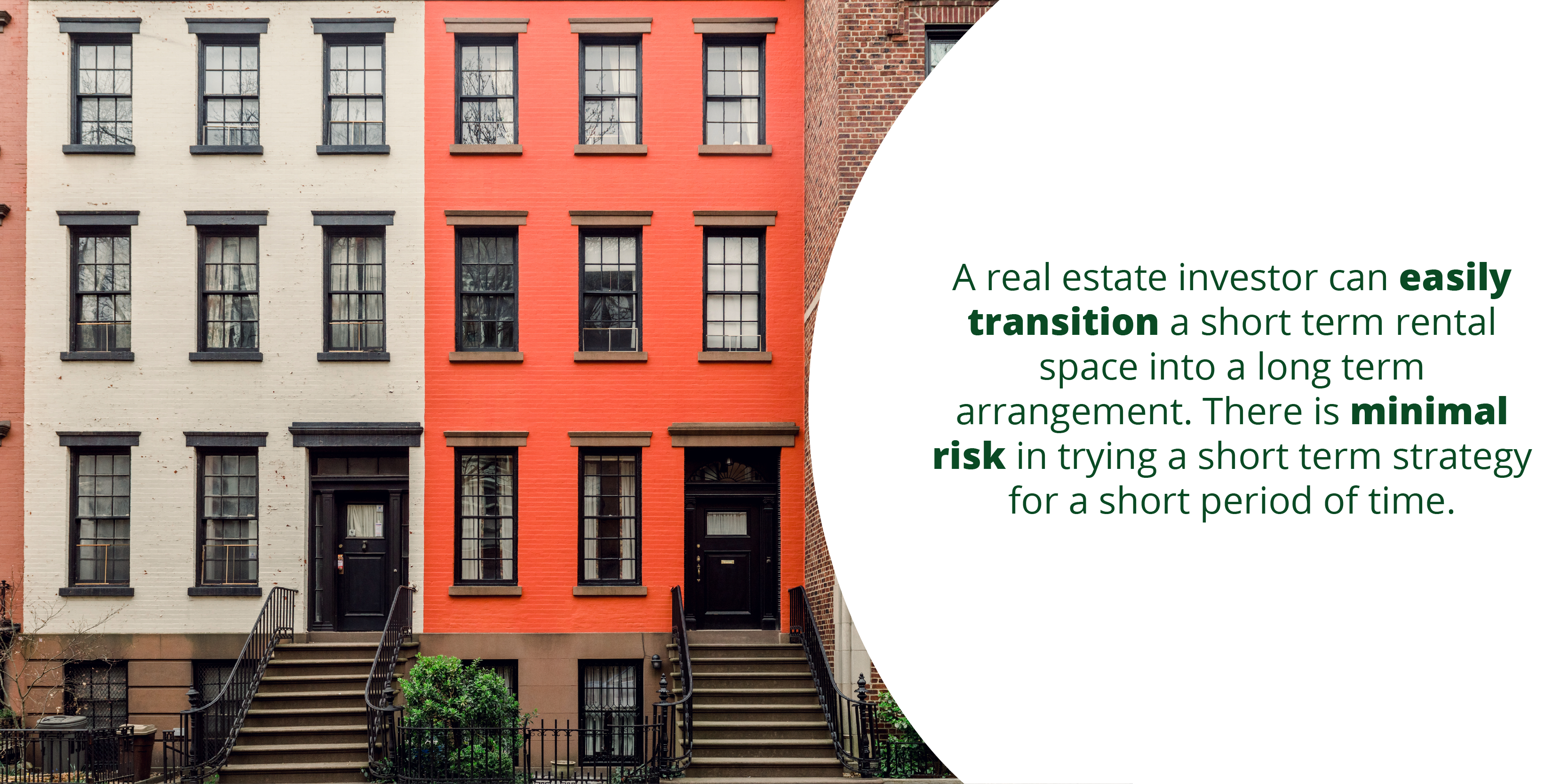 Short term rental agreements aren’t going anywhere any time soon. Whether or not these types of arrangements will take a major market share of apartment complexes and other multi-family home units remains to be seen. It seems likely that governmental restrictions on short term rental agreements will continue to become more restrictive in coming years, which might also impact the viability of short term rentals moving forward. For now, CRE investors would be wise to consider all of their options when leasing their properties.