Economists breathed a sigh of relief when the Census Bureau reported that U.S. employers added 559,000 jobs in May. That’s more than double the job creation in April and more in line with what expectations would be for a fully recovering economy. The unemployment rate renewed its downward trend, falling to 5.8%.

Forecasts for May job growth were slightly higher – most topped 600,000 – but after April’s surprising shortfall, no economist was making a confident estimate for May. The number reported Friday morning more closely mirrored Thursday’s data on private payrolls from ADP. The payroll processing giant reported 978,000 additions to payrolls in May. 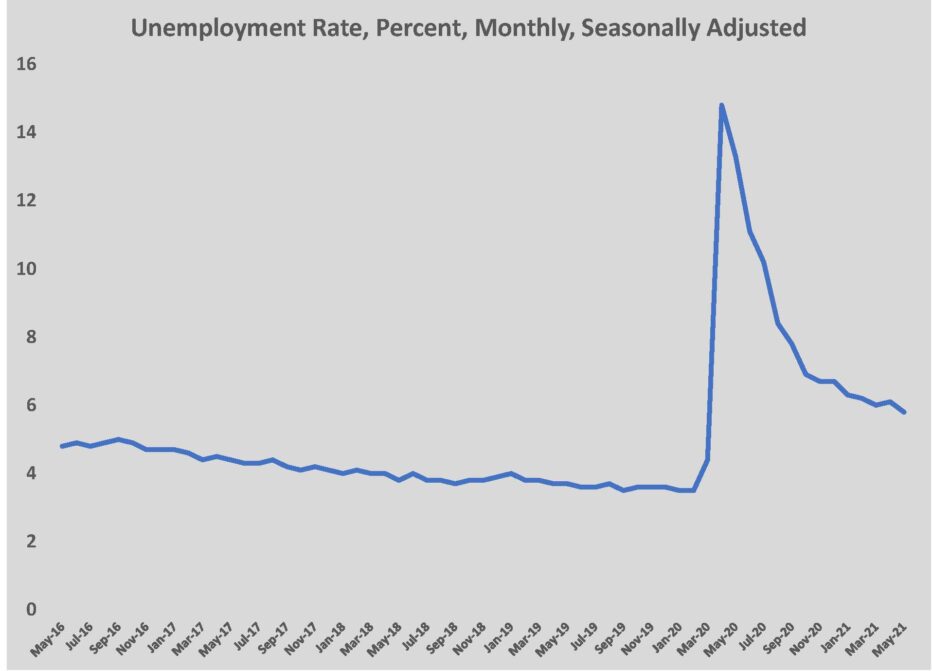 New hiring in May was reported to be lower than the potential for job growth. The JOLTS survey in May showed a record number of new openings. Employers are increasingly citing an inability to attract applicants. Employment recruiters unanimously report that listings are outnumbering job seekers by a wide margin. This input, along with the fact that wages have jumped 1.2% in the past two months, adds weight to Republicans seeking to end the supplemental and extended unemployment benefits, which they say is an incentive to stay unemployed.

The reality is more complicated than politicians care to embrace. No conclusive surveying has been done that can keep up with the dynamic situation of this recovery but there are a number of factors keeping people out of the workforce that have been identified. First among them is lingering concern about health. The pandemic has not ended. Vaccinations have knocked down the candidates for community spread but with at least 40% of the adult population unvaccinated, those with concerns about COVID-19 have reason to worry. Related to that, childcare capacity still lags what is needed. The nation’s largest childcare provider – the public school system – has not returned to normal operations yet. Reports of difficulty finding workers cut across most industries but the most common complaints are for low wage positions. These positions will be the ones that benefit most from the enhanced unemployment benefits. ZipRecruiter reports that more than half of its job seekers want work from home options while only 10% of employers are offering that option. Perhaps the most overlooked factor is that the economic recovery driving new hiring is a few months old. In most states, workers in the prime age cohorts of 25-55 have only been eligible for vaccination since mid-April. For those unemployed by the pandemic, the renewed activity has not been here long enough to overcome the many conflicting factors that are keeping workers – particularly young mothers – from re-entering the job market.

One indicator that this is the case is the online job search market. Indeed.com reported that postings were 27% higher at the end of May than in February 2020. ZipRecruiter notes that its listings have increased much faster than online searches.

None of this should be particularly surprising. The world’s biggest economy ground to a halt in about three days last March. Our economy tanked because about 300 million people didn’t leave home for six weeks. All things considered, this recovery has unfolded much more smoothly than expected. I can’t forecast how quickly job creation will ramp up or at what point in 2022 or 2023 the U.S. economy reaches full employment, but I can confidently predict that we will see disappointing job creation numbers again at some point before September. Looking at all the factors influencing economic recovery, it will be a bumpy ride back to normal in 2021.

The one data point that concerns me is the variance between where job seekers want to work and what employers expect for work-from-home. As vaccination rates climb, the decline in infections and hospitalizations has accelerated even though restrictions on gathering have been removed. That has pushed more employers to accelerate plans for full-time return to the office or workplace. There has been a variance between what employees and their bosses predicted about work-from-home throughout the pandemic. Now that time has shown that employers can make the workplace safe from virus spread and the virus is on the decline, the gap has widened. If you think through how that gap may manifest itself, there could be some problems coming.

Employers that embrace work-from-home may attract more and better workers. That could be a competitive advantage. At the same time, if working from home is less productive than its proponents claim (and there is growing evidence that is the case), companies that attract good talent that works from home may fall behind its competition anyway. What will happen to workers with skills that translate well across industries when some industries can work from home better than others? It seems unlikely that a skilled construction worker would leave the trade to work in an industry that allows work-from-home, but will the office and administrative staff for a construction company change industries to work from home instead of the office? At minimum, I believe we will have to see these scenarios play out over the next couple of years before some sort of consensus on work-from-home is reached. And I’m not one who believes that we will end up with a hybrid solution, at least not one that looks different from the model that existed on Valentine’s Day 2020.

Construction is less likely to deal with as many of these uncertainties, including uncertainties about the economy. The nature of the industry is such that the ups and downs of 2021 will have an impact on 2022’s work. The outcome of 2021 is mostly baked in by June and the solutions to the problems of re-starting the economy in 2021 will be mostly worked out by 2022. Assuming that the U.S. can side step any lasting issues from the disrupted supply chain or inflation, construction will be booming in 2022.

Opportunities to land work are accelerating in Western PA. Bids on the $90 structural steel and concrete foundations package for the Airport Terminal Modernization Program was rejected and will be re-bid. The first bid packages for the $230 million FNB Financial Center in the Lower Hill District will go out to bid next week. Packages will include steel, foundations, concrete, and M/E/P. Braddock Library is taking CM proposals from Burchick, Jendoco, A. Martini & Co., PJ Dick, Massaro, and Sota for its 2-phase $13 million renovation. Diocese of Greensburg selected Volpatt Construction for the $2.5 million renovations to St Mary of Czestochowa Church. A. Martini & Co. was selected for the $1.8 million UPMC Passavant Cranberry Cancer Center renovation. C.H. Schwertner & Son started construction on the new Target store at the Kaufmann’s Grand on Fifth. BRIDGES & Co. is building the new $3 million Dialysis Clinic Inc. facility on Perry Highway in McCandless. Extra Storage Space selected Brackenridge Construction for its $6.5 million, 65,000 square foot expansion in Homewood. Continental Real Estate has shifted its Lot 10 building on the North Shore from office/retail/condo to 110-125 apartments. Thompson Thrift will be building the 336-unit, $60 million Prism at Diamond Ridge apartments at the end of 2021.