As the Shell Franklin project in Monaca gets underway in earnest, with the expectation of having 1,000 workers on site at year’s end, another major manufacturing project has already passed that milestone. In Berkeley County, WV, Fluor Corp. is building the new Tabler Station plant for Proctor & Gamble. The plant will be 1 million square feet under roof and involves a $500 million investment for its first phase. Workforce is going to peak at 1,500 this summer, according to P & G. Because of conditions in the DC/Baltimore market, the Tabler Station project is having a bigger impact on Pittsburgh-area contractors than the aforementioned Shell cracker.

That’s in part due to the fact that Bechtel and Great Arrow Builders are inclined to self-perform much more of the project than originally hoped. But DC-area contractors have also thus far been too busy in their own backyard to show as much interest in the P & G plant, which is located less than 3 hours southeast of Pittsburgh off I-81. Thus far, trade packages have been awarded to Pittsburgh-area contractors Mascaro Construction, Mosites Construction, McKamish Inc., Lighthouse Electric and Yates Construction, which has been working within the region at WVUH Ruby Hospital (and teaming with Pittsburgh contractors). Kinsley Construction from York has also landed a building. None of the packages have been large to date but expectations are that as the contracting continues throughout this year and next that multiple regional contractors could end up with $25-50 million in volume. For some of Pittsburgh’s contractors working on the project, that kind of volume could affect how they respond to projects in their own backyard.

In other project news, St. Clair Hospital short-listed PJ Dick, Mascaro and Yates for interviews this week for its $80 million expansion. The team of NEXT Architecture and Franjo Construction are working on Uber’s expansion into an additional 90,000 square feet in the Crucible Building in The Strip. The City of Pittsburgh Planning Commission OK’d 3 major office projects this week: Murland’s 90,000 square foot office on Forbes Avenue (to be built by Mascaro); RDC’s 105,000 square foot office on Smallman at 12th Street; and the $9 million repurposing of the former Art Institute’s building on the Boulevard of Allies, which M & K Wilkow is developing.

The PA Dept. of Labor released April employment data that showed Pittsburgh’s employment rose by 5,900 jobs from March and unemployment rose from 5.1% to 5.3%. Unemployment was down significantly when compared to April 2016, when the percentage of unemployment was 5.8%. Some of the decline is, unfortunately, a result of a shrinking workforce but there is also an upward trend that is positive. CBRE released an analysis of employment growth last week that showed that job growth has reached 0.45% since October 2016 and 0.71% since January. CBRE cited gains in restaurant/hospitality, financial services and especially in technology. The chart below shows that job growth in scientific research and development in Pittsburgh has far outpaced the rest of the U.S. over the past three years. Let’s hope this trend holds. 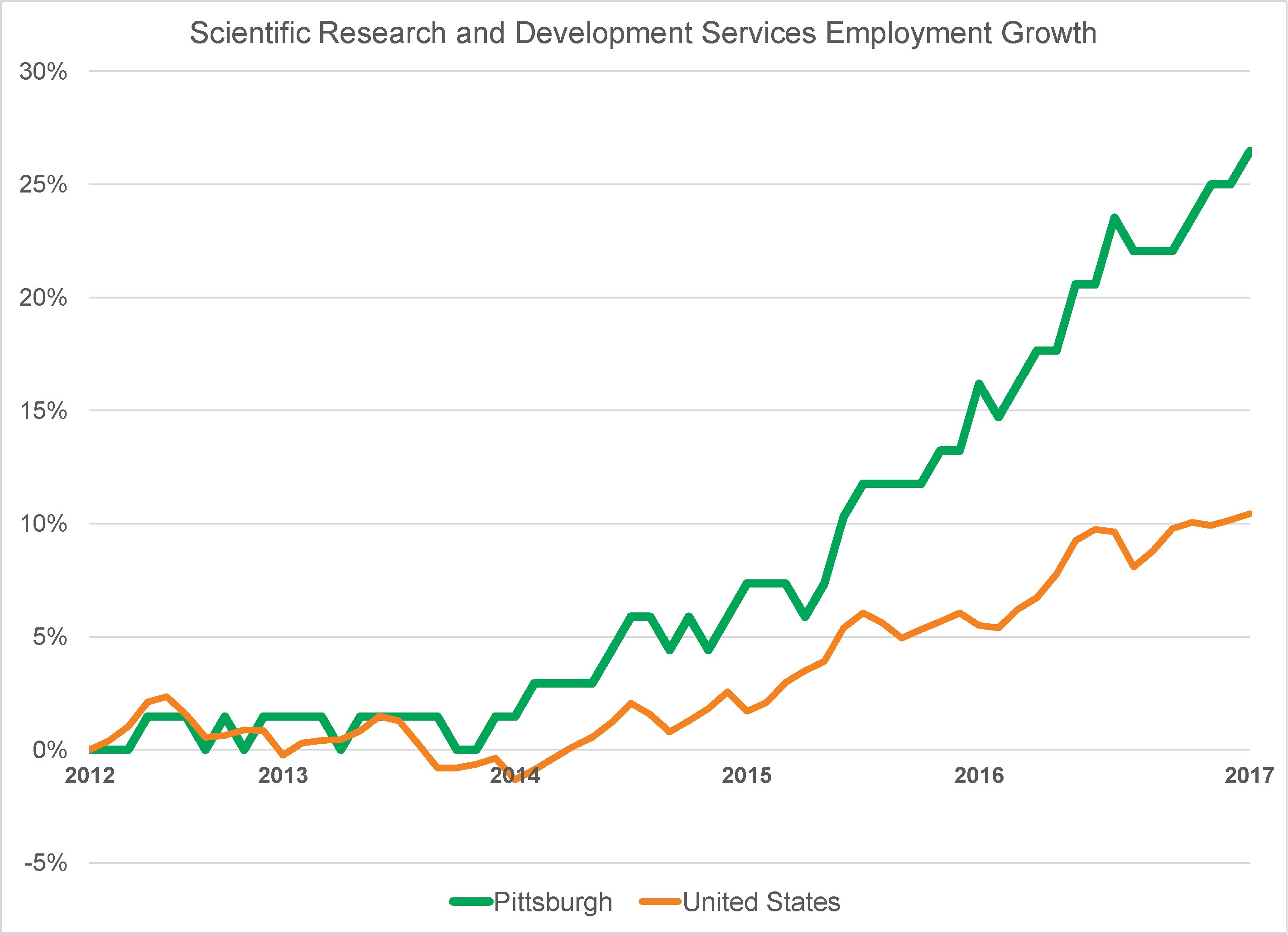